One of the most important things on our Vegas to-do list was to visit Gold and Silver pawn, which is the shop featured in History Channel’s Pawn Stars (one of Ollie’s favorite shows).  WHAT!? You’ve never watched pawn Stars?  You need to, its awesome!  You can check out the show/store’s website here: http://www.gspawn.com/

The show’s premise is fairly simple: it features a Las Vegas pawn shop that attracts very high end and rare artifcats.  The show’s stars are 4 of it’s workers, the Old Man (he owns the shop), his son Rick, Rick’s son Big Hoss, and their friend Chumlee (he’s my favorite!)  It is a reality show (but not the trashy Housewives type) that shows all of the interesting and sometimes fake treasures that come through the store. No joke, we watch this show every Monday night. It’s a pretty big deal in our apartment.  Going to this pawn shop was like getting to see the movie set from your favorite move-except better because all the characters were there!

Since the pawn shop is located right outside of Las Vegas proper WE HAD TO VISIT! We drove by the shop, casing the place out, on our first day in Vegas, but the line was around the building.  Having absolutely no desire to wait in line for hours, we swore to come back at a different time.  We reported to the shop promptly at 8:30 am the following morning, convinced that all the other tourists would be hungover and asleep.  There was already a line at the door.  We figured it would move pretty quickly because it was so early, we were wrong.  The shop didn’t even open until 9! (Despite the fact that it is plastered in advertisements and billboards that shout 24 HOUR PAWN-there’s no truth in advertising).

Fortunately the wait wasn’t too bad, and we spent the half an hour pepping in one of the windows (before they covered it with a trash bag) checking out the Old Man’s desk, and even seeing the Old Man himself! By the time the shop opened at 9 the line was at least 100 people deep-good thing we got there early!

I did a little research before we visited the pawn shop (I desperately wanted to be featured on the show!-it has always been my life’s ambition to be an actress, I figured this might be a good first step) and had even emailed the Pawn Stars producers in an attempt to get some face time with the camera crew.  When I began planning this trip, knowing the pawn shop was a must-see, I desperately searched for something interesting/cool/rare enough to pawn to get Ollie and I on the show.  During this extensive search my mom and I discovered that the old glass Heinz Ketchup bottles she has displayed throughout the house are actually from the 1800’s!  I emailed the producers of the show with pictures of the bottles saying I wanted to pawn them at the store (I wasn’t actually going to sell them I JUST WANT TO BE ON TV!).  Unfortunately they never responded, so my rise to stardom has been foiled once again.

So I had nothing to pawn (I only really wanted to pawn something if it would get me on the show) which lead me to the decision to buy something from the pawn shop.  “This is the perfect solution,” I thought to myself.  I figured that nothing I owned would fetch a high enough price to make it worth pawning, and this way I would forever have a keepsake from our visit at the shop! Excellent!

Not so excellent.  When we finally made it into the shop (it looked just like it did on TV!) We were awed by the amount of items for sale.  Only problem? since they’re all freakishly rare, they’re all freakishly expensive.  Items included but are not limited to: A Patriot’s Super Bowl Ring selling for a cool $100,000, a Japanese map from WWII that was so expensive it wasn’t even for sale, and a civil war gun that cost more money than I make in a year. 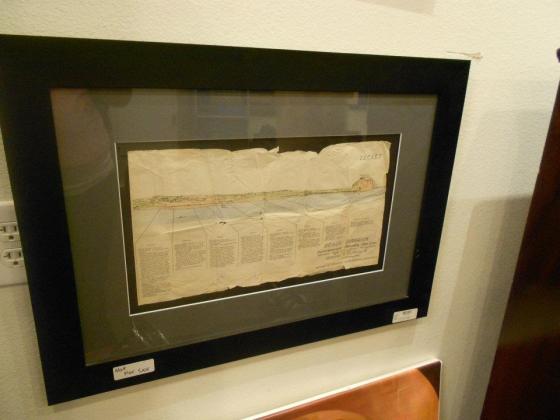 YIKES! I hadn’t won big in the casino yet-how was I going to buy anything?  I had bought a shot glass with Chumlee’s face on it, but that was from the Pawn Stars store inside the actual Pawn Shop, so I figured that didn’t count.

Then low and behold I stumbled across a case with rare coins (which I had no interest in).  Also in this case were rare casino chips-that were running for a bout $150 each.  Also in the case were not-so-rare casino chips that were $9 each. PERFECT!  And there was one with a pony on it! DOUBLE PERFECT.  I had found my purchase.  After chatting up the man behind the counter (he told us Rick, Big Hoss, and Chumlee were filming at a different location-sad face), I was rung up and had my first ever pawn shop purchase!  And from a famous pawn shop none-the-less.

The $25 pony chip resides in my wallet along side a $1 chip from the Hard Rock casino, and the $1 token from the Aladdin that my dad gave me.  They are currently serving as my lucky charms 🙂

Thanks for reading! xo Whitney

The picture says it all, my name is Whitney, I run this show ("this show" meaning this blog) and if you are here, you are awesome. I love ponies, baking, anything that sparkles, reading, writing (no arithmetic), and sunshine. Now that you're here (and awesome) stay a while and check things out. Thanks for reading! xo Whitney

Get grabby with my button

Please feel free to pin, reblog, tumble, tweet, facebook, obsess over, etc. anything from my site. Most of the words/pretty pictures/yummy recipes are my own, so if you do share it please give credit where credit is due-thieving is wrong and Santa sees everything! If you to stumble across something on my page that is not mine, please note that I have properly credited the source. If you plan on sharing it as well, take the time to credit the correct source. You know not to copy, right?